Flywheels are kinetic energy storage devices, which store energy in a rotating mass. Their structure consists of rotating cylinders connected to a motor that stores kinetic energy. The conversion of electric to kinetic energy is achieved through the use of a variable-frequency motor or drive. Energy is stored by using the motor to accelerate the flywheel to higher velocities. The motor of the flywheel works to accelerate the unit to a higher velocity in order to store energy. Subsequently, it is able to draw electrical energy by slowing the unit down. The amount of stored energy is proportional to the square of the flywheel’s rotational speed.

The traditional flywheels are generally limited to a rotational speed of a few thousand revolutions per minute (RPM) due to bearings and materials. It can distinguish between high-speed and low-speed flywheels according to the number of revolutions per minute. The high-speed flywheels have rotors made of fiber-reinforced plastic and can withstand speeds of more than 100,000 revolutions per minute. Low-speed flywheels have steel rotors at 10,000 rpm. Modern flywheel systems are made from carbon fiber and use magnetic bearings and a vacuum to minimize friction and drag. A flywheel energy storage system has many advantages for it is running in a high-vacuum environment and has no friction loss, small wind resistance, a cycle efficiency of 85%–95%, long life, and is ecofriendly and free of maintenance. The flywheels can be charged and discharged rapidly, transferring large amount of power in seconds with a high efficiency. The largest commercially used flywheel provides around 1.6MW for 10s. High numbers of cycling will not cause degradation problems for flywheels, for which super-capacitors and batteries are not comparable, as they usually have to be replaced after 10 … 15 years due to degradation. Therefore, the benefit of flywheels can be seen for a long service time scale. However, high self-discharge is a critical disadvantage of flywheels, which determines that they are not suitable for a long-term energy storage like batteries. 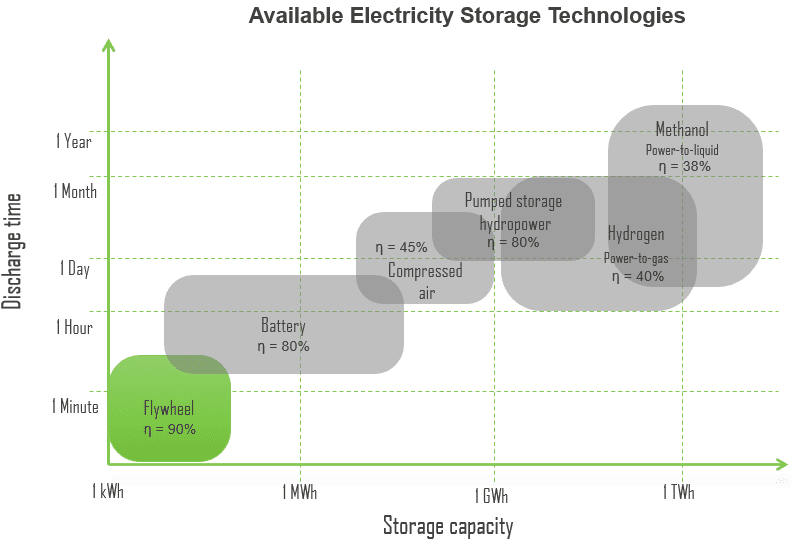