Facebook Instagram Youtube Twitter
Skip to content
In fluid dynamics, the Navier-Stokes equations are equations that describe the three-dimensional motion of viscous fluid substances. In situations where there are no strong temperature gradients in the fluid, these equations provide a very good approximation of reality.

Even though the Navier-Stokes equations have only a limited number of known analytical solutions, they are amenable to fine-gridded computer modeling. The main tool available for their analysis is CFD analysis. As can be seen, the Navier-Stokes equations are second-order nonlinear partial differential equations. Their solutions have been found to a variety of interesting viscous flow problems. They may be used to model the weather, ocean currents, airflow around an airfoil, and water flow in a pipe or a reactor. The Navier–Stokes equations in their full and simplified forms help with the design of aircraft and cars, blood flow study, nuclear reactors’ design, and many other things.

Even though the Navier-Stokes equations have only a limited number of known analytical solutions, they are amenable to fine-gridded computer modeling. The main tool available for their analysis is CFD analysis. CFD is a branch of fluid mechanics that uses numerical analysis and algorithms to solve and analyze problems that involve turbulent fluid flows. It is widely accepted that the Navier–Stokes equations (or simplified Reynolds-averaged Navier–Stokes equations) can exhibit turbulent solutions, and these equations are the basis for essentially all CFD codes. It is possible now to achieve approximate but realistic CFD results for a wide variety of complex two- and three-dimensional viscous flows.

The Navier–Stokes equations are also of great interest in a purely mathematical sense. Unfortunately, the turbulent flow´s highly intermittent and irregular character complicates all analyses. It has not yet been proven that in three dimensions, solutions always exist or that if they do exist, then they are smooth. The general solution of the Navier-Stokes equations with turbulences is often said to be the “last unsolved problem in classical mathematical physics.”

In the view of Kolmogorov (Andrey Nikolaevich Kolmogorov was a Russian mathematician who made significant contributions to the mathematics of probability theory and turbulence), turbulent motions involve a wide range of scales. From a macroscale at which the energy is supplied to a microscale at which energy is dissipated by viscosity.

The smallest scales in turbulent flow are known as the Kolmogorov microscales. These are small enough that molecular diffusion becomes important and viscous dissipation of energy occurs, and the turbulent kinetic energy is dissipated into heat.

The smallest scales in turbulent flow, i.e., the Kolmogorov microscales, are: 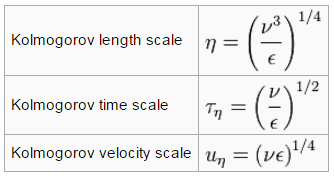 The size of the smallest eddy in the flow is determined by viscosity. The Kolmogorov length scale decreases as viscosity decreases. For very high Reynolds number flows, the viscous forces are smaller for inertial forces. Smaller-scale motions are then necessarily generated until the effects of viscosity become important, and energy is dissipated. The ratio of largest to smallest length scales in the turbulent flow is proportional to the Reynolds number (raises with the three-quarters power).

This causes direct numerical simulations of turbulent flow to be practically impossible. For example, consider a flow with a Reynolds number of 106. In this case, the ratio L/l is proportional to 1018/4. Since we have to analyze a three-dimensional problem, we need to compute a grid that consists of at least 1014 grid points. This far exceeds the capacity and possibilities of existing computers.