During such a process,  a system starts from initial state i, described by a pressure pi, a volume Vi and a temperature Ti, passes through various quasi-static states to a final state f, described by a pressure pf, a volume Vf, and a temperature Tf. In this process, energy may be transferred from or into the system and can be done by or on the system. One example of a thermodynamic process is increasing the pressure of gas while maintaining a constant temperature. In the following section, examples of thermodynamic processes are of the highest importance in the engineering of heat engines.

In thermodynamics, an irreversible process is defined as a process that cannot be reversed, which cannot return both the system and the surroundings to their original conditions.

During irreversible process the entropy of the system increases.

A process that eventually returns a system to its initial state is called a cyclic process. After a cycle, all the properties have the same value they had at the beginning. For such a process, the final state is the same as the initial state, so the total internal energy change must be zero.

It must be noted, according to the second law of thermodynamics, not all heat provided to a cycle can be transformed into an equal amount of work. Some heat rejection must take place. The thermal efficiency, ηth, of any heat engine as the ratio of the work it does, W, to the heat input at the high temperature, QH.  ηth = W/QH.

An adiabatic process is a thermodynamic process in which there is no heat transfer into or out of the system (Q = 0). The system can be considered to be perfectly insulated. In an adiabatic process, energy is transferred only as work. The assumption of no heat transfer is very important since we can use the adiabatic approximation only in very rapid processes. There is not enough time for the transfer of energy as heat to take place to or from the system in these rapid processes.

In real devices (such as turbines, pumps, and compressors), heat losses and losses in the combustion process occur. Still, these losses are usually low compared to overall energy flow, and we can approximate some thermodynamic processes by the adiabatic process.

An isothermal process is a thermodynamic process in which the system’s temperature remains constant (T = const). The heat transfer into or out of the system typically must happen at such a slow rate to continually adjust to the temperature of the reservoir through heat exchange. In each of these states, the thermal equilibrium is maintained.

Since there are changes in internal energy (dU) and changes in system volume (∆V), engineers often use the enthalpy of the system, which is defined as:

In many thermodynamic analyses, it is convenient to use enthalpy instead of internal energy, especially in the first law of thermodynamics.

In engineering, both important thermodynamic cycles (Brayton and Rankine cycle) are based on two isobaric processes. Therefore the study of this process is crucial for power plants.

An isochoric process is a thermodynamic process in which the volume of the closed system remains constant (V = const). It describes the behavior of gas inside the container that cannot be deformed. Since the volume remains constant, the heat transfer into or out of the system does not the p∆V work but only changes the system’s internal energy (the temperature).

In engineering internal combustion engines, isochoric processes are very important for their thermodynamic cycles (Otto and Diesel cycle). Therefore the study of this process is crucial for automotive engineering.

A polytropic process is any thermodynamic process that can be expressed by the following equation:

The polytropic process can describe gas expansion and compression, which include heat transfer. The exponent n is known as the polytropic index, and it may take on any value from 0 to ∞, depending on the particular process.

Throttling of the wet steam is also associated with the conservation of enthalpy. But in this case, a reduction in pressure causes an increase in vapor quality. 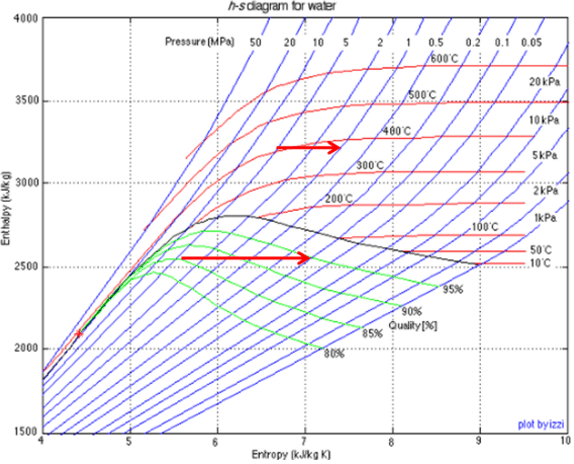