One of the most familiar forces is the weight of a body, which is the gravitational force that the Earth exerts on the body. In general, gravitation is a natural phenomenon by which all things with mass are brought toward one another. The terms mass and weight are often confused with one another, but it is important to distinguish between them. It is absolutely essential to understand clearly the distinctions between these two physical quantities.

Law of Conservation of Matter
The law of conservation of matter or principle of matter conservation states that the mass of an object or collection of objects never changes over time, no matter how the constituent parts rearrange themselves.

The mass can neither be created nor destroyed.

The law requires that during any nuclear reaction, radioactive decay, or chemical reaction in an isolated system, the total mass of the reactants or starting materials must be equal to the mass of the products.

Mass and weight are related: Bodies having a large mass also have a large weight. A large stone is hard to throw because of its large mass and hard to lift off the ground because of its large weight. To understand the relationship between mass and weight, consider a freely falling stone with an acceleration of magnitude g (g = 9.81 m/s2 is the acceleration due to Earth’s gravitational field). Newton’s second law tells us that a force must act to produce this acceleration. If a 1 kilogram stone falls with an acceleration of the required force has magnitude:

The force that makes the body accelerate downward is its weight. Any body near the surface of the Earth with a mass of 1 kg must weigh 9.8 N to give it the acceleration we observe when it is in free fall.

Example: The weight of a stone on the Earth, on Mars, and the Moon

Weight of a stone on the Earth 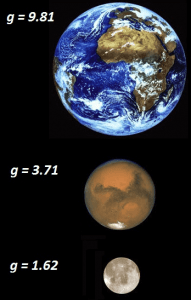 The acceleration due to Earth’s gravitational field is gEarth = 9.81 m/s2.The weight of a stone with mass 1 kg on the Earth can be calculated as:

Weight of a stone on the Mars

Therefore the weight of the same stone with mass 1 kg on the Mars is:

Weight of a stone on the Moon

Therefore the weight of the same stone with mass 1 kg on the Moon is:

The usual symbol for mass is m, and its SI unit is the kilogram. The SI standard of mass is a cylinder of platinum and iridium kept at the International Bureau of Weights and Measures near Paris and assigned, by international agreement, a mass of 1 kilogram.

In the special theory of relativity, certain types of matter may be created or destroyed. Still, the mass and energy associated with such matter remain unchanged in quantity in all of these processes. It was found the rest mass of an atomic nucleus is measurably smaller than the sum of the rest masses of its constituent protons, neutrons, and electrons. Mass was no longer considered unchangeable in the closed system. The difference is a measure of the nuclear binding energy which holds the nucleus together. According to the Einstein relationship (E=mc2), this binding energy is proportional to this mass difference, known as the mass defect. In this “mass-increase” formula, m is referred to as the rest mass of the object. It follows from this formula that an object with a nonzero rest mass cannot travel at the speed of light. As the object approaches the speed of light, the object’s momentum increase without bound. On the other hand, when the relative velocity is zero, the Lorentz factor is simply equal to 1, and the relativistic mass is reduced to the rest mass. With this interpretation, the mass of an object appears to increase as its speed increases. It must be added, many physicists believe an object has only one mass (its rest mass) and that it is only the momentum that increases with speed.