What is a nuclear reactor?

A reactor “SCRAM” (or “reactor trip”) is the rapid insertion or fall of the control rods into the core to stop the fission chain reaction. At PWRs, all control rods are usually inserted within two to four seconds.

A reactor is considered to be shutdown when it is subcritical and sufficient shutdown reactivity exists so there is no immediate probability of secondary criticality. The main conventional types of nuclear reactors are:

Principle of operation of PWR-type reactor

Pressurized water reactors use a reactor pressure vessel (RPV) to contain the nuclear fuel, moderator, control rods and coolant. They are cooled and moderated by high-pressure liquid water (e.g. 16MPa). At this pressure water boils at approximately 350°C (662°F).  Inlet temperature of the water is about 290°C (554°F). The water (coolant) is heated in the reactor core to approximately 325°C (617°F) as the water flows through the core. As it can be seen, the reactor has approximately 25°C subcooled coolant (distance from the saturation).

The hot water that leaves the pressure vessel through hot leg nozzle and is looped through a steam generator, which in turn heats a secondary loop of water to steam that can run turbines and generator. Secondary water in the steam generator boils at pressure approximately 6-7 MPa, what equals to 260°C (500°F) saturated steam. Typical reactor nominal thermal power is about 3400MW, thus corresponds to the net electric output 1100MW. Therefor the typical efficiency of the Rankine cykle is about 33%.

Example – How to Change Power of Nuclear Reactor

During any power increase the temperature, pressure, or void fraction change and the reactivity of the core changes accordingly. It is difficult to change any operating parameter and not affect every other property of the core. Since it is difficult to separate all these effects (moderator, fuel, void etc.) the power coefficient is defined. The power coefficient combines the Doppler, moderator temperature, and void coefficients. It is expressed as a change in reactivity per change in percent power, Δρ/Δ% power. The value of the power coefficient is always negative in core life but is more negative at the end of the cycle primarily due to the decrease in the moderator temperature coefficient. It is an illustrative example, following data do not correspond to any reactor design.

The main problems or rather challenges, that must be taken into account when designing reactors, are: 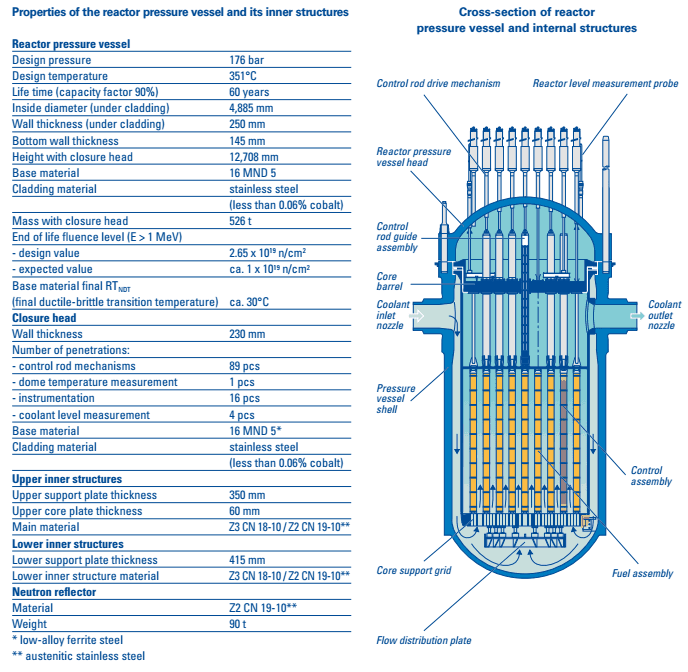 The world’s first nuclear reactor operated about two billion years ago. The natural nuclear reactor formed at Oklo in Gabon, Africa, when a uranium-rich mineral deposit became flooded with groundwater that acted as a neutron moderator, and a nuclear chain reaction started.  These fission reactions were sustained for hundreds of thousands of years, until a chain reaction could no longer be supported. This was confirmed by existence of isotopes of the fission-product gas xenon and by different ratio of U235/U238 (enrichment of natural uranium).

The existence of this phenomenon was discovered in 1972 at Oklo in Gabon, Africa.