With respect to the heat transfer mechanism employed, the main types are:

Dry cooling towers operate by heat transfer through a surface that separates the working fluid from ambient air, such as in a tube to air heat exchanger, utilizing convective heat transfer. They do not use evaporation; hence the consumption of makeup water is minimal.

Wet cooling towers (or open circuit cooling towers) operate on the principle of evaporative cooling. Evaporative cooling is the addition of water vapor into the air, which causes a lowering of the temperature of the air and the water. The energy needed to evaporate the water is taken from the remaining mass of water, thus reducing its temperature. The cooling water from the plant is pumped to a height of about 10 m and distributed over the cooling tower fill, cascading down the fill to the well at the bottom. Inside the wet cooling tower, fills are added to increase contact surface as well as contact time between air and water to provide better heat transfer.

Nearly all nuclear power plants, which use cooling towers, use wet cooling towers based on the principle of evaporative cooling. Some water, about 1%, goes into the air in the form of water vapor by absorbing its latent heat of vaporization from the remaining water and thus causes the reduction in the water temperature as ambient air is drawn past a flow of water. The remaining water (cooled) is collected in a sump at the bottom of the tower and returned back to the condenser.

The types of cooling towers based on the draught (method of air circulation) are: 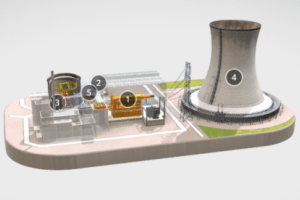 The cooling system or the circulating water system provides a continuous supply of cooling water to the main condenser to remove the heat rejected by the turbine and auxiliary systems (e.g., the turbine bypass system).  In this process, the cooling water becomes hot. This energy is rejected to the atmosphere via cooling towers or directly to the seawater or a river. Note that not all nuclear power plants have cooling towers, and conversely, the same kind of cooling towers are often used at large coal-fired power plants.

In a typical condensing steam turbine, the exhausted steam condenses in the condenser, and it is at a pressure well below atmospheric (absolute pressure of 0.008 MPa, which corresponds to 41.5°C). This steam is in a partially condensed state (point F), typically of a quality near 90%.

The pressure inside the condenser (thus the enthalpy of outlet steam) is given by the ambient air temperature (i.e., the water temperature in the cooling system). and other parameters:

An increase in the ambient temperature may cause a proportional increase in pressure of exhausted steam (ΔT = 14°C is usually a constant); hence the thermal efficiency of the power conversion system may decrease. In other words, the electrical output of a power plant may vary with ambient conditions, while the thermal power remains constant.

It must be noted there is also a lower limit for the steam outlet temperature, thus for the cooling system. Below 0.008 MPa and 41.5 °C, the specific volume of exhausted steam significantly increases, which requires huge blades in the last rows of a low-pressure stage of the steam turbine. Moreover, with a decrease in the turbine exhaust pressure, the vapor quality decreases (or dryness fraction). At some point, the expansion must be ended to avoid damages that could be caused to blades of steam turbine by low-quality steam.

In modern nuclear power plants, the overall thermal efficiency is about one-third (33%), so 3000 MWth of thermal power from the fission reaction is needed to generate 1000 MWe of electrical power. Therefore, about 2000MWth of unusable energy must be rejected to fulfill the second law of thermodynamics.

To maintain the parameters inside the condenser (0.008 MPa and 41.5 °C), the cooling water must be sufficiently cold, and there cannot be a large temperature difference between the outlet and inlet water temperature; hence the flow rate through the cooling system must be very high. The flow rate through the cooling system (with wet cooling towers) may be up to 100 000 m3/h (27.7 m3/s). The condenser inlet water may have about 22°C (strongly depending on ambient conditions), while the condenser outlet may have about 25°C.

The seawater cooling systems operate at higher flow rates, for example, 130 000 m3/h. In general, the energy can be rejected to the atmosphere via cooling towers or directly to the seawater or a river.