Facebook Instagram Youtube Twitter
Skip to content
Turbine blades are the most important element of steam turbines. They are the principal elements that convert the pressure energy of working fluid into kinetic energy. Their dimensions and their shape determine the overall efficiency, reliability, and lifespan. Modern turbine blades often use nickel-based superalloys that incorporate chromium, cobalt, and rhenium.

The most important turbine elements are the turbine blades. They are the principal elements that convert the pressure energy of working fluid into kinetic energy. Turbine blades are of two basic types: 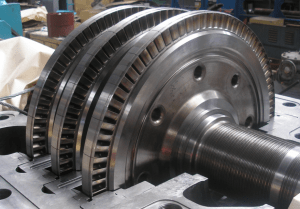 In steam turbines, the steam expands through the fixed blade (nozzle), where the pressure potential energy is converted to kinetic energy. The high-velocity steam from fixed nozzles impacts the moving blades, then changes its direction and also expands (in the case of reaction type blades). The change in its direction and the steam acceleration (in the case of reaction type blades) applies a force. The resulting impulse drives the blades forward, causing the rotor to turn. Steam turbine types based on blade geometry and energy conversion process are: The efficiency and reliability of a turbine depend on the proper design of the blades. It is, therefore, necessary for all engineers involved in turbines engineering to have an overview of the importance and the basic design aspects of the steam turbine blades. The engineering of turbine blades is a multi-disciplinary task. It involves thermodynamics, aerodynamics, mechanical and material engineering.

Steam turbine blades are not exposed to such high temperatures, but they must withstand an operation with two-phase fluid. A high content of water droplets can cause rapid impingement and erosion of the blades, which occurs when condensed water is blasted onto the blades. For example, condensate drains are installed in the steam piping leading to the turbine to prevent this. Another challenge for engineers is the design of blades of the last stage of the LP turbine. These blades must be (due to high specific volume of steam) very long, which induces enormous centrifugal forces during operation. Therefore, turbine blades are subjected to stress from centrifugal force (turbine stages can rotate at tens of thousands of revolutions per minute (RPM), but usually at 1800 RPM) and fluid forces that can cause a fracture, yielding, or creep failures. Steam turbines may be classified into different categories depending on their construction, working pressures, size, and other parameters. But there are two basic types of steam turbines:

The main distinction is how the steam is expanded as it passes through the turbine.