Facebook Instagram Youtube Twitter
Skip to content
Nuclear reactors are the major source of human-generated antineutrinos. This is because antineutrinos are produced in negative beta decay. A nuclear reactor occurs especially the β− decay because the common feature of the fission fragments is an excess of neutrons (see Nuclear Stability). An unstable fission fragment with the excess of neutrons undergoes β− decay, where the neutron is converted into a proton, an electron, and an electron antineutrino. The existence of emission of antineutrinos and their very low cross-section for any interaction leads to a very interesting phenomenon. Roughly about 5% (or about 12 MeV of 207 MeV) of released energy per one fission is radiated away from the reactor in the form of antineutrinos. For a typical nuclear reactor with thermal power of 3000 MWth (~1000MWe of electrical power), the total power produced is higher, approximately 3150 MW, of which 150 MW is radiated away into space antineutrino radiation. This amount of energy is forever lost since antineutrinos can penetrate all reactor materials without any interaction. A common statement in physics texts is that the mean free path of a neutrino is approximately a light-year of lead. Moreover, a neutrino of moderate energy can easily penetrate a thousand light-years of lead (according to J. B. Griffiths).

Please note that billions of solar neutrinos per second pass (mostly without any interaction) through every square centimeter (~6×1010) on the Earth’s surface and antineutrino radiation is by no means dangerous.

. These nuclei have together 98 protons and 136 neutrons, while fission fragments (parent nuclei) have together 92 protons and 142 neutrons. This means after each U-235 fission the fission fragments must undergo on average 6 negative beta decays (6 neutrons must decay to 6 protons) and therefore 6 antineutrinos must be produced per each fission. The typical nuclear reactor therefore produces approximately 6 x 1020 antineutrinos per second (~200 MeV/fission; ~6 antineutrinos/fission; 3000 MWth; 9.375 x 1019 fissions/sec). 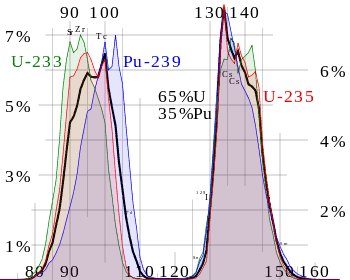