Facebook Instagram Youtube Twitter
Skip to content
Neutrons have zero electrical charges and cannot directly cause ionization. Neutrons ionize matter only indirectly. For example, when neutrons strike the hydrogen nuclei, proton radiation (fast protons) results. This reaction is known as scattering. Neutrons can also be absorbed. Most absorption reactions result in the loss of a neutron coupled with the production of one or more gamma rays since the resulting nucleus is usually unstable.

Neutrons are neutral particles. Therefore they travel in straight lines, deviating from their path only when they collide with a nucleus to be scattered into a new direction or absorbed. Neither the electrons surrounding (atomic electron cloud) a nucleus nor the electric field caused by a positively charged nucleus affect a neutron’s flight. In short, neutrons collide with nuclei, not with atoms. A very descriptive feature of the transmission of neutrons through bulk matter is the mean free path length (λ – lambda), which is the mean distance a neutron travels between interactions. It can be calculated from the following equation:

Neutrons may interact with nuclei in one of the following ways: 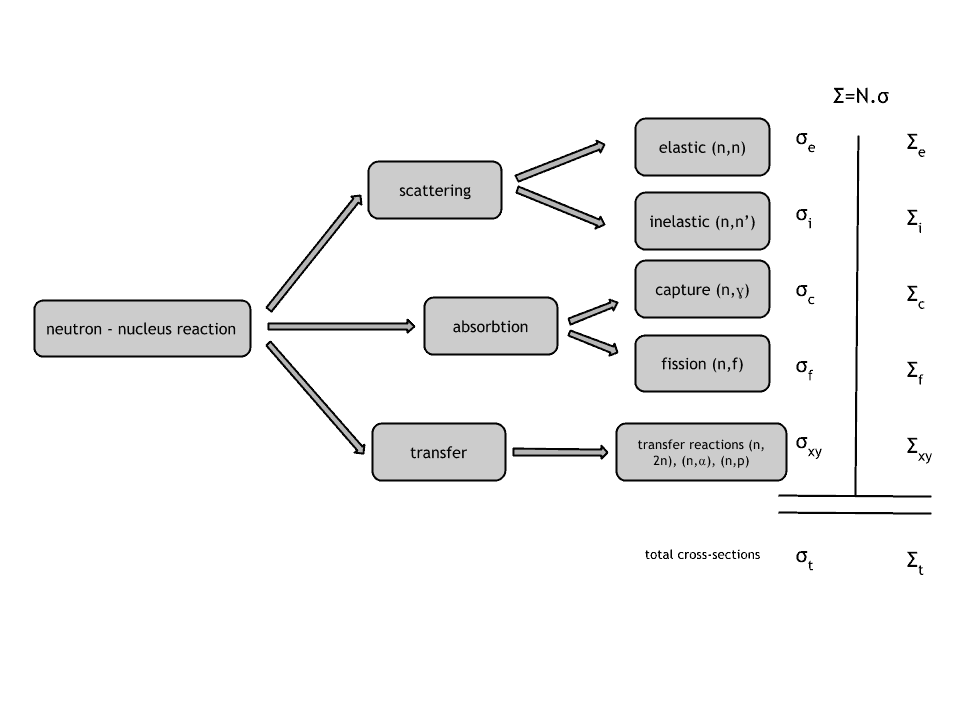 Types of Interactions of Neutrons with Matter

Elastic Scattering Reaction
Generally, a neutron scattering reaction occurs when a target nucleus emits a single neutron after a neutron-nucleus interaction. No energy is transferred into nuclear excitation in an elastic scattering reaction between a neutron and a target nucleus.
Inelastic Scattering Reaction
In an inelastic scattering reaction between a neutron and a target nucleus, some energy of the incident neutron is absorbed into the recoiling nucleus, and the nucleus remains in the excited state. Thus while momentum is conserved in an inelastic collision, the kinetic energy of the “system” is not conserved.
Neutron Absorption
The neutron absorption reaction is the most important type of reactions that take place in a nuclear reactor. The absorption reactions are reactions where the neutron is completely absorbed, and the compound nucleus is formed. This is a very important feature because the decay mode of such a compound nucleus does not depend on how the compound nucleus was formed. Therefore a variety of emissions or decays may follow. The most important absorption reactions are divided by the exit channel into two following reactions:
Radiative Capture
The neutron capture is one of the possible absorption reactions that may occur. In fact, for non-fissionable nuclei, it is the only possible absorption reaction. Capture reactions result in the loss of a neutron coupled with the production of one or more gamma rays. This capture reaction is also referred to as a radiative capture or (n, γ) reaction, and its cross-section is denoted by σγ.

Nuclear Fission
Nuclear fission is a nuclear reaction in which the nucleus of an atom splits into smaller parts (lighter nuclei). The fission process often produces free neutrons and photons (in the form of gamma rays) and releases a large amount of energy. In nuclear physics, nuclear fission is either a nuclear reaction or a radioactive decay process. The case of the decay process is called spontaneous fission, and it is a very rare process.
Neutron Emission
Although the neutron emission is usually associated with nuclear decay, it must also be mentioned in connection with neutron nuclear reactions. Some neutrons interact with a target nucleus via a compound nucleus. Among these compound nuclei, reactions are reactions in which a neutron is ejected from the nucleus, and they may be referred to as neutron emission reactions. The point is that compound nuclei lose their excitation energy in a way, which is identical to radioactive decay. A very important feature is that the mode of decay of the compound nucleus does not depend on how the compound nucleus was formed.
Charged Particle Ejection
Charged particle reactions are usually associated with the formation of a compound nucleus, which is excited to a high energy level, that such compound nucleus can eject a new charged particle. At the same time, the incident neutron remains in the nucleus. After the new particle is ejected, the remaining nucleus is completely changed but may or may not exist in an excited state depending upon the mass-energy balance of the reaction. This type of reaction is more common for charged particles as incident particles (such as alpha particles, protons, and so on).

The extent to which neutrons interact with nuclei is described in terms of quantities known as cross-sections. Cross-sections are used to express the likelihood of particular interaction between an incident neutron and a target nucleus. It must be noted this likelihood does not depend on real target dimensions. In conjunction with the neutron flux, it enables the calculation of the reaction rate, for example, to derive the thermal power of a nuclear power plant. The standard unit for measuring the microscopic cross-section (σ-sigma) is the barn, equal to 10-28 m2. This unit is very small. Therefore barns (abbreviated as “b”) are commonly used. The microscopic cross-section can be interpreted as the effective ‘target area’ that a nucleus interacts with an incident neutron.

A macroscopic cross-section is derived from microscopic and the material density:

This law is applicable only for absorption cross-section and only in the 1/v region.

Example of cross-sections in 1/v region:

This cross-section reduction is caused only due to the shift of temperature of the surrounding medium.

The absorption cross-section is often highly dependent on neutron energy. Note that nuclear fission produces neutrons with a mean energy of 2 MeV (200 TJ/kg, i.e., 20,000 km/s). The neutron can be roughly divided into three energy ranges:

The resonance neutrons are called resonance for their special behavior. At resonance energies, the cross-section can reach peaks more than 100x higher than the base value of the cross-section. At these energies, the neutron capture significantly exceeds the probability of fission. Therefore it is very important (for thermal reactors) to quickly overcome this range of energy and operate the reactor with thermal neutrons, increasing the probability of fission.

A Doppler broadening of resonances is a very important phenomenon, which improves reactor stability. The prompt temperature coefficient of most thermal reactors is negative, owing to a nuclear Doppler effect. Although the absorption cross-section depends significantly on incident neutron energy, the shape of the cross-section curve also depends on the target temperature.

Nuclei are located in atoms that are themselves in continual motion owing to their thermal energy. As a result of these thermal motions, neutrons impinging on a target appear to the target’s nuclei to have a continuous spread in energy. This, in turn, affects the observed shape of resonance. The resonance becomes shorter and wider than when the nuclei are at rest.

Typical cross-sections of materials in the reactor

The following table shows neutron cross-sections of the most common isotopes of the reactor core.