As was written, proportionality of half-lives is a key parameter, which determines type of radioactive equilibrium: As can be seen,  the secular equilibrium is particularly important in nature. Over the 4.5 billion years of the Earth’s history, especially uranium 238, uranium 235 and thorium 232 and members of their decay chains have reached radioactive equilibria between the parent nucleus and the various descendants. The half-lives of all their descendants are all extremely variable, and it is difficult to represent a range of timescales going from individual seconds to millions of years. Since daughter radioisotopes have different half-lives then secular equilibrium is reached after some time. In the long decay chain for a naturally radioactive element, such as uranium-238, where all of the elements in the chain are in secular equilibrium, each of the descendants has built up to an equilibrium amount and all decay at the rate set by the original parent. If and when equilibrium is achieved, each successive daughter isotope is present in direct proportion to its half-life (or to its decay constant).

Since its activity is inversely proportional to its half-life, each nuclide in the decay chain finally contributes as many individual transformations as the head of the chain. Radioactive cascade in the secular equilibrium significantly influences radioactivity (disintegrations per second) of natural samples and natural materials. All the descendants are present, at least transiently, in any natural sample, whether metal, compound, or mineral. For example, pure uranium-238 is weakly radioactive (proportional to its long half-life), but a uranium ore is about 13 times more radioactive (approximately 13 descendants in the decay chain) than the pure uranium-238 metal because of its daughter isotopes (e.g., radon, radium etc.) it contains. Not only are unstable radium isotopes significant radioactivity emitters, but as the next stage in the decay chain they also generate radon, a heavy, inert, naturally occurring radioactive gas. Moreover the decay heat of uranium and its decay products (e.g., radon, radium etc.) contributes to heating of Earth’s core. Together with thorium and potassium-40 in the Earth’s mantle is thought that these elements are the main source of heat that keeps the Earth’s core liquid.

The secular equilibrium can occasionally be disrupted when one of the intermediary nuclei leaves the sample (e.g., radon released from soil) where its ancestors are confined. These local disruptions are important to consider in the use of dating techniques. Disruption of the secular equilibrium also influences radioactivity of fresh nuclear fuel. Most of PWRs use the uranium fuel, which is in the form of uranium dioxide. But this uranium dioxide must be chemically purified and most of its decay chain is not present in the fresh nuclear fuel.

Isotope of uranium-234 is a member of the uranium series. This isotope has the half-life of only 2.46×105 years and therefore it do not belong to primordial nuclides (unlike 235U and 238U). On the other hand, this isotope is still present in the Earth’s crust, but this is due to the fact 234U is an indirect decay product of 238U. 238U decays via alpha decay into 234U. 234U decays via alpha decay into 230Th, except very small fraction (on the order of ppm) of nuclei which decays by spontaneous fission.

In a natural sample of uranium, these nuclei are present in the unalterable proportions of the radioactive equilibrium of the 238U filiation at a ratio of one atom of 234U for about 18 500 nuclei of 238U. As a result of this equilibrium these two isotopes (238U and 234U) contribute equally to the radioactivity of natural uranium. 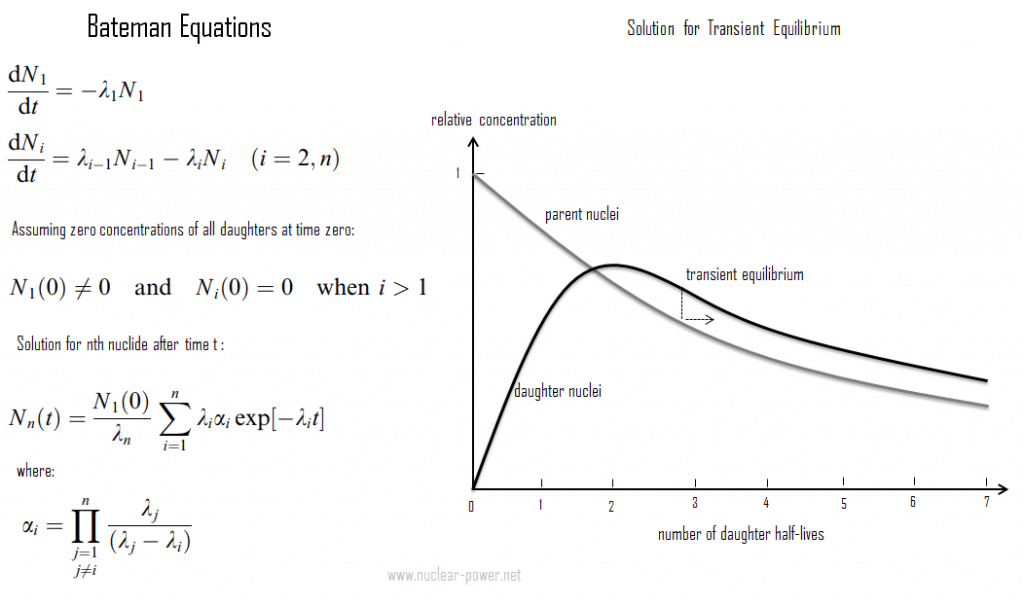 Also the transient equilibrium can occasionally be disrupted when one of the intermediary nuclei leaves the sample where its ancestors are confined.

A special example of radioactive equilibrium are concentrations of iodine-135 and xenon-135 in a nuclear reactor, but in this case, the xenon burnup must be taken into account. Note that, in this special case, the half-life of the parent nucleus is shorter than the half-life of the daughter nucleus. The production and removal of xenon can be characterized by the following differential equations: From this equation it can be seen that the equilibrium value for xenon 135 increases as power increases, because the numerator is proportional to the fission reaction rate. But the thermal flux is also in the denominator. Therefore, as the thermal flux exceeds some value, the xenon burnup begins to dominate, and at approximately 1015 neutrons.cm-2.s-1, the xenon-135 concentration approaches a limiting value. The equilibrium iodine 135 and xenon 135 concentrations as a function of neutron flux are illustrated in the following figure.

In physics, the Bateman equations are a set of first-order differential equations, which describe the time evolution of nuclide concentrations undergoing serial or linear decay chain. The model was formulated by Ernest Rutherford in 1905 and the analytical solution for the case of radioactive decay in a linear chain was provided by Harry Bateman in 1910. This model can be also used in nuclear depletion codes to solve nuclear transmutation and decay problems.

For example, ORIGEN is a computer code system for calculating the buildup, decay, and processing of radioactive materials. ORIGEN uses a matrix exponential method to solve a large system of coupled, linear, first-order ordinary differential equations (similar to the Bateman equations) with constant coefficients.

The Bateman equations for radioactive decay case of n – nuclide series in linear chain describing nuclide concentrations are as follows: These equations are usually used for the exact evolution of isotopic changes in the nuclear fuel during fuel depletion. Fuel depletion is usually modelled mathematically as a set of differential equations known as evolution equations.