In previous chapters (nuclear chain reaction), it was derived that leakage of neutrons from the system significantly influences the criticality of a reactor. For thermal reactors, two variables are defined to describe the leakage process:

We can rewrite this equation without a substantial loss of accuracy for large reactors simply by replacing the diffusion length Ld and the fermi age τ with the migration length M in the one group equation. The term B4 is very small for large reactors, and therefore it can be neglected. We may then write.

Except research reactors, practically all power reactor cores are designed to minimize the neutron leakage. Neutron reflectors surround reactor cores to minimize leakage. The neutron reflector scatters back (or reflects) into the core many neutrons that would otherwise escape. By reducing neutron leakage, the reflector increases keff and reduces the amount of fuel necessary to maintain the reactor critical for a long period.

In LWRs, the neutron reflector is installed for the following purposes:

The reflector’s efficiency is measured by the ratio of the number of neutrons reflected into the reactor to the number entering the reflector. This ratio is called the albedo or the reflection coefficient. The albedo can be expressed in terms of neutron currents as: 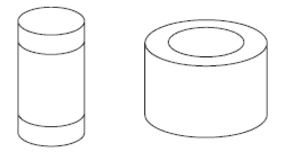 In general, neutron reflector may be axial and radial, but, for example, in pressurized water reactors the axial reflector does not form any special device. The neutrons are reflected by the core inlet and outlet coolant. On the other hand, common water volume cannot be used as a reflector in the radial direction because it is of the highest importance to maintain high flow rates in the core and not bypass fuel assemblies. Therefore the radial neutron reflectors are installed in PWR and BWR reactor cores. The design of such radial neutron reflectors may vary, but we can distinguish between two basic types:

The mathematical treatment of a reflected thermal reactor can be illustrated most simply by considering a slab reactor of thickness extending from x= -a/2 to x= +a/2 reflected on both sides by a non-multiplying slab (neutron reflector) of thickness b. Neutrons will be considered as monoenergetic with thermal energy. Although the one-group method may provide reasonable results for the reactor, this method does not accurately predict the flux.

For the determination of the flux distribution in the reactor and the reflector, the following diffusion equations in these zones need to be solved:

At interfaces between two different diffusion media (such as between the reactor core and the neutron reflector), on physical grounds, the neutron flux and the normal component of the neutron current must be continuous. In other words, φ and J are not allowed to show a jump.

It must be added, as J must be continuous, the flux gradient will show a jump if the diffusion coefficients in both media differ from each other. Since the solution of these two diffusion equations requires four boundary conditions, we have to use two boundary conditions more.

The solution must be finite in those regions where the equation is valid, except perhaps at artificial singular points of a source distribution.  This boundary condition can be written mathematically as:

If d is not negligible, the physical dimensions of the reactor are increased by d, and this condition can be written as Φ(a/2 + bex) =  0.

The solution in the core satisfying these boundary conditions is:

The solution in the reflector satisfying these boundary conditions is: It was pointed out, the one-group method may provide reasonable results for the reactor, but this method does not accurately predict the flux. The energy of neutrons must be grouped into at least two groups to be more accurate. The two-group energy model leads to very interesting and important results that must be considered in the design of nuclear reactors.

In this method, the entire range of neutron energies is divided into 2 intervals (fast and thermal groups). All neutrons within each interval are lumped into a group, and in this group, all parameters such as the diffusion coefficients or cross-sections are averaged.

To find the solution in a reactor core and a reflector, it is necessary to solve the following diffusion equations for the fast and thermal energy groups are: The solution of this system of homogeneous algebraic equations leads to a determinant of the coefficients. Such solution is shown in:

One of the striking results of such a solution is that the thermal flux reaches a local maximum near the core-reflector interface. This behavior cannot be derived using the one-group diffusion method because it is caused just by the thermalization of fast neutrons. The fast neutrons produced in the core can enter the reflector at high energy and are not absorbed as quickly in the reflector as neutrons thermalizing in the core because absorption cross-sections in the reflector are much smaller than in the core (due to the absence of fuel). The thermal neutrons accumulate then near the core-reflector interface, resulting in the local maximum, usually known as the reflector peak. This also reduces the non-uniformity of the power distribution in the peripheral fuel assemblies and reduces neutron leakage, i.e., increases keff of the system (or reduces the critical size of the reactor). This effect can be seen in the following figure.

The neutron reflector scatters back (or reflects) into the core many neutrons that would otherwise escape. The neutrons reflected back into the core are available for a chain reaction. This means that the minimum critical size of the reactor is reduced. Alternatively, if the core size is maintained, the reflector makes additional reactivity available for higher fuel burnup. The decrease in the critical size of the core required is known as reflector savings. The concept of reflector savings is very important in many reactor calculations.

It can be derived that there is a difference in the reflected and unreflected critical dimensions of a reactor. This difference is known as the reflector savings, it is denoted by δ, and for infinite slab reactor, it is determined by:

These effects, however, become less significant as the size of the reactor, measured in migration lengths, increases. The reflector savings amounts to a smaller fraction of the core dimension as its size becomes larger.

Adding a reflector to a reactor allows either the volume of the reactor or the requirements on fuel to be reduced or some combination of the two. If the reflector savings is known, the calculation of the critical dimensions of a reflected reactor needs only the solution of the bare reactor, which is a simpler problem. For example, it is only necessary for the cylindrical reactor to determine the bare critical radius R0 and the reflected radius is simply R = R0 – δ, where R0  is the critical diameter of a bare reactor.

Logically, the reflector coefficient (albedo) increases as the reflector thickness increases. But how thick should a reflector be? From an engineering point of view, reflectors are, of course, limited by certain reactor designs (e.g.,, by the width of the reactor pressure vessel). But, in general, very little is to be gained by increasing the thickness of the reflector beyond a value of 2L (2 x diffusion length).

With H20, a thickness of 2L is only about 5 cm, whereas, for D20, it is about 300 cm. It would require a considerable amount of D20 to extend the moderator by 300 cm since this additional D20 is being placed on the outside of the core. From these values, it is obvious the neutron reflector plays a crucial role in heavy water or graphite reactors, in which the neutron leakage is higher than in LWRs.

Because of the time delay in the process of diffusing in and out of the reflector, the kinetics effect of a reflector can be thought of as an effective increase in the neutron lifetime in the core under steady-state conditions or as an additionally delayed neutron precursor under transient operations.