Facebook Instagram Youtube Twitter
Skip to content
The neutron capture is one of the possible absorption reactions that may occur. Capture reactions result in the loss of a neutron coupled with the production of one or more gamma rays. This capture reaction is also referred to as a radiative capture or (n, γ) reaction, and its cross-section is denoted by σγ. In fact, for non-fissionable nuclei, it is the only possible absorption reaction.

At very high flux, atomic nuclei do not necessarily have enough time to decay via beta particle emission between neutron captures. This happens inside stars, where a really tremendous flux may be reached. As a result of many capture reactions without beta decay, the mass number rises by a large amount, while the atomic number stays the same. Only afterward, the highly unstable nuclei decay via many β− decays to stabilize themselves.

Since the process entails a succession of many rapid neutron captures, it is called the r-process. The r-process is a nucleosynthesis process that occurs in core-collapse supernovae and is responsible for creating approximately half of the neutron-rich atomic nuclei heavier than iron. 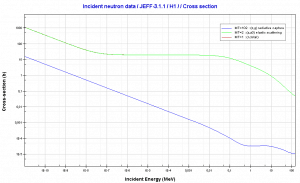 In reactor calculations, the neutron capture reaction is as important as the fission reaction. Its impact on the neutron balance is evident. But this reaction is also of importance from another point of view. Fissionable nuclei or even fissile nuclei may capture a neutron. This capture leads to the formation of unstable nuclei with higher neutron numbers. Such unstable nuclei undergo a nuclear decay, which may lead to the formation of other fissile nuclei. This process is also called nuclear transmutation and is responsible for new fuel breeding in nuclear reactors.

232Th is the predominant isotope of natural thorium. If this fertile material is loaded in the nuclear reactor, the nuclei of 232Th absorb a neutron and become nuclei of 233Th. The half-life of 233Th is approximately 21.8 minutes. 233Th decays (negative beta decay) to 233Pa (protactinium), whose half-life is 26.97 days. 233Pa decays (negative beta decay)  to 233U, which is a very good fissile material. On the other hand, proposed reactor designs must physically isolate the protactinium from further neutron capture before beta decay occurs.

In the common case, the cross-section is usually much larger at low energies than at high energies. For thermal neutrons (in 1/v region), radiative capture cross-sections also increase as the neutron’s velocity (kinetic energy) decreases. Therefore the 1/v Law can determine the shift in capture cross-section if the neutron is in equilibrium with a surrounding medium. This phenomenon is because the nuclear force between the target nucleus and the neutron has a longer time to interact. Energy levels of the compound state. For neutron absorption reaction on 238U, the first resonance E1 corresponds to the excitation energy of 6.67eV. E0 is a base state of 239U. Radiative capture and elastic scattering cross-sections in 16O and 238U.

The first resonance in 238U at 6.67 eV, which corresponds to the first virtual level in 239U, has a total width of only 0.027 eV, and the mean life of this state is 2.4×10-14s. By contrast, the resonance observed at 443 keV in 16O, which corresponds to the first virtual state in 17O, has a total width of 41 keV, giving a mean lifetime of 1.5×10-21s. Thus it is highly likely that the compound state in 239U decays at least to some extent by gamma-ray emission, while the compound state in 17O must decay primarily by nucleon emission. The 443-keV resonance in 16O is clearly a scattering resonance, whereas the 6.67-eV resonance in 238U is in part a capture resonance.

The Doppler broadening of resonances is a very important phenomenon, which improves reactor stability. The prompt temperature coefficient of most thermal reactors is negative, owing to a nuclear Doppler effect. Although the absorption cross-section depends significantly on incident neutron energy, the shape of the cross-section curve also depends on the target temperature.

Nuclei are located in atoms that are themselves in continual motion owing to their thermal energy. As a result of these thermal motions, neutrons impinging on a target appear to the nuclei in the target to have a continuous spread in energy. This, in turn, affects the observed shape of resonance. The resonance becomes shorter and wider than when the nuclei are at rest.

The radiative capture cross-section at energies above the resonance region drops rapidly to very small values. This rapid drop is caused by the compound nucleus, which is formed in more highly excited states. In these highly excited states, it is more likely that one neutron obtains energy in collision with another nucleon greater than its binding energy in the nucleus. The neutron emission becomes dominant, and gamma decay becomes less important. Moreover, at high energies, the inelastic scattering and (n,2n) reaction are highly probable at the expense of both elastic scattering and radiative capture.