The basic classification of nuclear reactors is based upon the average energy of the neutrons, which cause the bulk of the fissions in the reactor core. From this point of view, nuclear reactors are divided into two categories: Comparison of neutron spectra in a typical LWR and a sodium-cooled fast breeder reactor. Note that, the fast reactor spectrum is highly affected by the elastic scattering cross-section of used coolant.
The main differences between these two types are, of course, in neutron cross-sections, that exhibit significant energy dependency. It can be characterized by capture-to-fission ratio, which is lower in fast reactors. There is also a difference in the number of neutrons produced per one fission, which is higher in fast reactors than in thermal reactors. These very important differences are caused primarily by differences in neutron fluxes. Therefore it is very important to know detailed neutron energy distribution in a reactor core.
Classification of neutrons according to their kinetic energies

The reactor physics does not need this fine division of neutron energies. The neutrons can be roughly (for purposes of reactor physics) divided into three energy ranges:

Even most reactor computing codes use only two neutron energy groups:

The first part of the neutron flux spectrum in thermal reactors is the region of fast neutrons. All neutrons produced by fission are born as fast neutrons with high kinetic energy.

Basic features of prompt neutron energy spectra are summarized below:

The modern spectrum representation of the prompt fission neutron spectrum and average prompt neutron multiplicity is the Madland-Nix Spectrum (Los Alamos Model). This model is based upon the standard nuclear evaporation theory and utilizes an isospin-dependent optical potential for the inverse process of compound nucleus formation in neutron-rich fission fragments.

Depending on the type of the reactor, and their spectrum, the delayed neutrons may be more (in thermal reactors) or less effective than prompt neutrons (in fast reactors). To include this effect into the reactor kinetic calculations, the effectively delayed neutron fraction – βeff must be defined.

Therefore the fast neutron spectrum can be described by the following points:

The fast neutron spectrum can be approximated by the following  (normalized to one) distribution:

In fast neutron reactors, there is an insignificant number of neutrons that can reach the thermal or intermediate energies. On the other hand, in thermal reactors, neutrons have to be moderated to profit from the larger cross-sections at lower energies. In these reactors, the neutrons are predominantly absorbed only when they are in kinetic equilibrium with the thermal movement of the surrounding atomic nuclei.

There is an intermediate energy region (1 eV to 0.1 MeV) between the fast and thermal regions. For this region, the 1/E dependency is typical. If the energy (E) is halved, the flux Ф(E) doubles. This 1/E dependence is caused by the nature of the slowing down process. In this region, Σs(E) varies only a little. The elastic scattering removes a constant fraction of the neutron energy per collision (see logarithmic energy decrement), independent of energy. Therefore the neutron loses larger amounts of energy per collision at higher energies than at lower energies. The neutrons lose a constant fraction of kinetic energy per collision causes the energy-dependent neutron flux to “pile up” at lower energies. 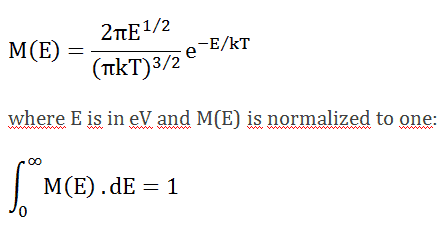 in which n0 is the total thermal neutron density.

The most probable energy (for which the spectrum is maximum) is E = kT. At room temperature, this is 0.025 eV. The velocity corresponding with this energy is 2200 m/s. This energy is particularly important since reference data, such as nuclear cross-sections, are tabulated for a neutron velocity of 2200 m/s.

But this distribution only holds for complete thermal equilibrium. Unfortunately, some absorption will always be present in a nuclear reactor, and this equilibrium will never be complete. As a result of 1/v behavior, low energy neutrons are absorbed preferentially, which leads to a shift of the spectrum to higher energies.

On the other hand, the neutron leakage has an opposite effect. With decreasing energy the diffusion coefficient D decreases as a result of the increasing cross-sections, therefore the neutron leakage preferentially removes neutrons with higher energies. This effect strongly depends on the size of the multiplying system, but in most cases it is much less important than the presence of absorption. From the physics point of view, the main differences among reactor types arise from differences in their neutron energy spectra. The basic classification of nuclear reactors is based upon the average energy of the neutrons, which cause the bulk of the fissions in the reactor core. The neutron energy spectrum also influences fuel breeding. As was written in LWRs, the fuel temperature also influences the rate of nuclear breeding (the breeding ratio).

Instead of increasing fuel temperature, a reactor can be designed with so-called “spectral shift control”.  The main idea of the spectral shift is based on the neutron spectrum shifting from the resonance energy region (with lowest p – resonance escape probability) at the beginning of the cycle to the thermal region (with the highest p – resonance escape probability) at the end of the cycle.  In pressurized water reactors, chemical shim (boric acid) and burnable absorbers are used to compensate for an excess of reactivity of reactor core along the fuel burnup (long-term reactivity control). From the neutronic utilization aspect, compensation by absorbing neutrons in poison is not ideal because these neutrons are lost. For better utilization of the neutrons, fertile isotopes can absorb these neutrons to produce fissile nuclei (in radiative capture). These fissile nuclei would contribute to obtaining more energy from the fuel.

The spectral shift method can be used to offset the initial excess of reactivity. There are many different ways of such regulation in the core. Spectral shift control can be performed by coolant density variation during the reactor cycle or by changing the moderator-to-fuel ratio with some mechanical equipment. Some of the current advanced reactor designs use for spectrum shift movable water displacers to change the moderator-to-fuel ratio. A decrease in reactivity caused by fuel burnup is simply compensated by the withdrawal of these movable water displacers while changing the moderator-to-fuel ratio. This makes it possible to exclude chemical shim from the operational modes completely. This method promises significant natural uranium savings (up to 50% of natural uranium).