Skip to content
In general, subcritical multiplication is the phenomenon that accounts for the changes in neutron flux that takes place in a subcritical reactor with source neutrons due to reactivity changes.

During a PWR startup, the value of keff increases and:

In previous chapters, especially in the Reactor Criticality chapter, the basic classification of states of a reactor according to the multiplication factor was defined. One of these states is a subcritical state defined as: In general, subcritical multiplication is the phenomenon that accounts for the changes in neutron flux that takes place in a subcritical reactor with source neutrons due to reactivity changes.

An equation governing the kinetics of a subcritical reactor can be written as:

Source Neutrons and External Source of Neutrons
The term “source neutrons” refers to neutrons other than prompt or delayed fission neutrons. In general, they come from sources other than neutron-induced fission. These neutrons are very important during reactor startup and shutdown operations when the reactor is subcritical, because they allow to monitor the subcriticality of a reactor usually via source range excore neutron detectors.

The primary and secondary sources are similar to a control rod in mechanical construction. Both types of source rods are clad in stainless steel.

Sb-Be Source - Antimony-Beryllium Source
Sb-Be neutron source is typical external neutron source used in commercial nuclear reactors. It is usually loaded into fuel assemblies near the periphery of the core, because the source-range excore detectors are installed outside the pressure vessel. Sb-Be source is a two component source and prior to irradiation contains natural antimony (57.4% of 121Sb and 42.6% of 123Sb) and natural beryllium (100% of 9Be). The first component serves as a source of strong gamma rays, while the second component is a neutron emitter element.

These γ-rays have sufficient energy to knock out a neutron from the second component, 9Be, which has the lowest threshold (1.66 MeV) for neutron emission. The (γ,n) source that uses antimony-124 as the gamma emitter is characterized in the following endothermic reaction.

The antimony-beryllium source produces nearly monoenergetic neutrons with dominant peak at 23keV. Using the laws of energy and momentum conservation one can derive that the 1691 keV and 2091 keV gamma rays produce two groups of neutrons:

Source neutrons play an important role in reactor safety, especially during shutdown state and reactor startup. Without source neutrons, there would be no subcritical multiplication and the neutron population in the subcritical system would gradually approach to zero. That means, each neutron generation would have fewer neutrons than the previous one because keff is less than 1.0.

When the reactor is made subcritical after operating at a critical state, the neutron population at first undergoes a prompt drop as a result of rapid decrease in prompt neutrons. After a short time begins to decrease exponentially with a period corresponding to decay of the longest-lived delayed neutron precursors (i.e., ~80s). With source neutrons, the neutron flux stabilizes itself at a corresponding level, which is determined by source strength, S, and by the multiplication factor, keff.

For a defined source strength of n0 neutrons per neutron generation, the neutron population (i.e., the neutron flux) is given by:

where, n0 are source neutrons (0. generation) and n0keffi are neutrons from i-th generation. As i goes to infinity, the sum of this geometric series is (for keff < 1):

Consider a reactor in which: As can be seen, the neutron population stabilizes itself at level n = 250, which is equal to source multiplied by factor M. The addition of source neutrons to the reactor containing fissionable material has the effect of maintaining a much higher stable neutron level due to the fissions occurring than the neutron level that would result from the source neutrons alone. As can be seen, the amount of time it takes to reach the steady-state neutron level is approximately equal to time of 10 neutron generations (i.e., 10 x 0.1s = 1s).

Now, we will illustrate, what happens to the neutron population when the value of keff is changed. During a reactor startup, for example, an initially subcritical reactor is driven to criticality via a series of discrete control rod withdrawals. During these withdrawals a reactivity increases. After each control rod withdrawal, the operator must wait to allow the reactor to attain the steady-state neutron level. The amount of time it takes to reach the steady-state neutron level after a reactivity change increases as keff approaches the critical state.

Consider a reactor in which: 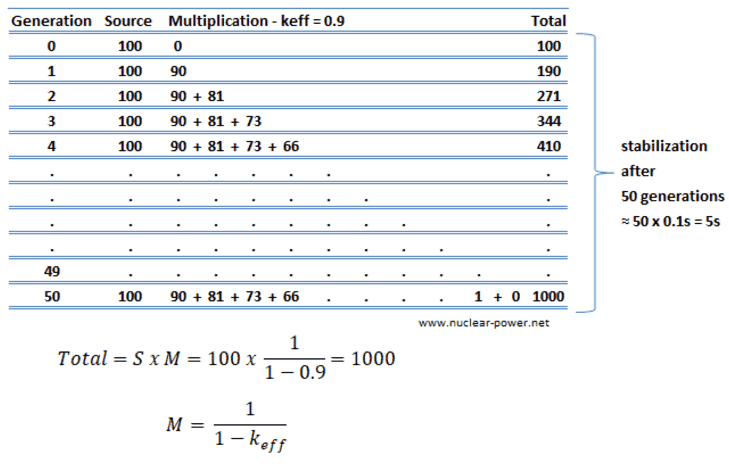 As can be seen, the neutron population stabilizes itself at level n = 1000, which is equal to source multiplied by factor M. As can be seen, the amount of time it takes to reach the steady-state neutron level is significantly higher, since it is approximately equal to time of 50 neutron generations (i.e., 50 x 0.1s = 5s). The reason is evident in the series expression in the figure for keff = 0.9. As keff increases, more terms in the series are significant, meaning that more previous generations of source neutrons contribute to the present population.

Therefore, during a reactor startup, the value of keff increases and:

It must be noted, the real PWR cores reach reactivities around keff = 0.92 – 0.95 at the beginning of the reactor startup. Values around 0.6 are not common.

It is obvious the subcritical multiplication factor significantly rises:

Therefore, instead of plotting M directly, its inverse (1/M or 1/CR) is plotted on a graph of:

Note that, a true 1/M plot requires knowledge of the neutron source strength. Because the actual source strength is usually unknown, a reference count rate is substituted. As criticality is approached, 1/CR approaches zero. Therefore in startup procedure the value of 1/CR provides engineers with an effective tool for monitoring the approach to criticality.

Assume a criticality approach by control rod withdrawal. For this procedure operators check especially the control rods position (usually in steps) and the count rate (CR) from source-range detectors. The initial count rate on the detectors prior to rod withdrawal is 100 cps. There are main parameters in the following table. From these parameters the 1/M Plot is constructed. As can be seen, the estimated critical parameters can be predicted with extrapolation to the point, where CR0/CR → 0.