Facebook Instagram Youtube Twitter
Skip to content
Samarium 149 is an indirect product of U-235 fission and has a very large neutron capture cross-section (about 42,000 barns). It does not decay since it is a stable isotope. In a typical nuclear reactor fueled with uranium-235, the presence of 149Sm as an indirect fission product is very important in the power operation of a nuclear reactor.

Samarium is a naturally-occurring chemical element with atomic number 62, which means there are 62 protons and 62 electrons in the atomic structure. The chemical symbol for samarium is Sm. Samarium is a typical member of the lanthanide series, and it is a moderately hard silvery metal that readily oxidizes in air.

Samarium was first discovered in 1879 by the French chemist Paul Émile Lecoq de Boisbaudran. The name samarium is after the mineral samarskite from which it was isolated. Although classified as a rare earth element, samarium is the 40th most abundant element in the Earth’s crust and is more common than metals like tin.

In the nuclear industry, especially natural and artificial samarium 149 has an important impact on the operation of a nuclear reactor. Samarium 149 has a very large neutron capture cross-section (about 42,000 barns). Since natural samarium contains about 14% of 149Sm, it can be used as an absorbing material in control rods.

Samarium 149 is also an indirect product of U-235 fission. It is important for physicists and reactor operators to understand the mechanisms that produce and remove samarium from the reactor to predict how the reactor will respond following changes in power level. As was written, samarium 149 has a significant impact on the operation of a nuclear reactor. Samarium 149 is an indirect product of U-235 fission and has a very large neutron capture cross-section (about 42,000 barns). It does not decay since it is a stable isotope. Almost no samarium 149 results directly from fission (γSm =  10-12), but most comes from the decay chain, Nd-149 (β– decay, 1.73 hr; γNd = 1.09%) to Pm-149 (β– decay, 53.1 hr) to Sm-149 (stable). The instantaneous production rate of samarium-149 is dependent on the promethium-149 concentration and, therefore, on the local neutron flux history. On the other hand, the destruction rate of samarium-149 is also dependent on the instantaneous local neutron flux. Its significance is primarily caused by two factors:

Neither the cross-section nor the yield is as big for this nuclide as for xenon 135, so the samarium reactivity effects are much smaller. Fission does not produce Sm 149 directly, and the fission yield of samarium 149 is nearly zero. Sm-149 is in the decay chain of the fission product neodymium 149, which decays to promethium 149. Because of the short half-life of Nd-149 (compared to the half-life of Pm-149), promethium may be considered as if it were formed directly from fission. The decay sequence is depicted in the figure.

An important difference between Xe-135 and Sm-149 is that samarium 149 is a stable isotope and remains in the core after shutdown. There are only two ways of samarium removal, and one of these processes is the samarium burn up when the reactor is at power operation. The rate of samarium burnup is dependent upon the neutron flux and the samarium 149 concentration (i.e., the reaction rate).

The second process is associated with refueling. During refueling, one-third or one-quarter of the core is usually removed from the spent fuel pool and replaced by fresh fuel assemblies. At the same time, the remainder is rearranged to a location in the core better suited to its remaining level of enrichment. Therefore refueling naturally leads to a decrease in the overall samarium content in the core.

Assuming that fission does not produce Sm 149 directly and neglects the small amount of promethium burnup, the situation is described as follows. The production and removal of samarium can be characterized by the following differential equations.

Response to Reactor Shutdown and Startup

After reactor shutdown, the neutron flux drops to zero, and there remains no channel of removal of samarium. On the other hand, a significant amount of accumulated promethium decays to samarium; therefore, the concentration of samarium increases to a new level. This buildup depends on the neutron flux level before the shutdown(i.e., upon the promethium equilibrium).

The new equilibrium is reached in approximately 20 days, and since samarium 149 is stable, the concentration remains constant during reactor outage. As shown in the figure, samarium 149 does not peak as xenon-135 does but increases slowly to a maximum value. As was written, samarium can be removed from the core by refueling. During refueling, one-third or one-quarter of the core is usually removed from the spent fuel pool and replaced by fresh fuel assemblies (without samarium). At the same time, the remainder is rearranged to a location in the core better suited to its remaining level of enrichment. Therefore refueling naturally leads to a decrease in the overall samarium content in the core.

After reactor startup, samarium concentration usually decreases due to samarium burnup and very slow decay of promethium. Similarly, transient changes in samarium on power level changes are very small compared to xenon and change very slowly over a week. In each case, the samarium level returns to the same equilibrium value.

Although samarium-149 has a constant poisoning effect during long-term sustained operation, its behavior during initial startup and post-shutdown and restart periods require special reactor design considerations. 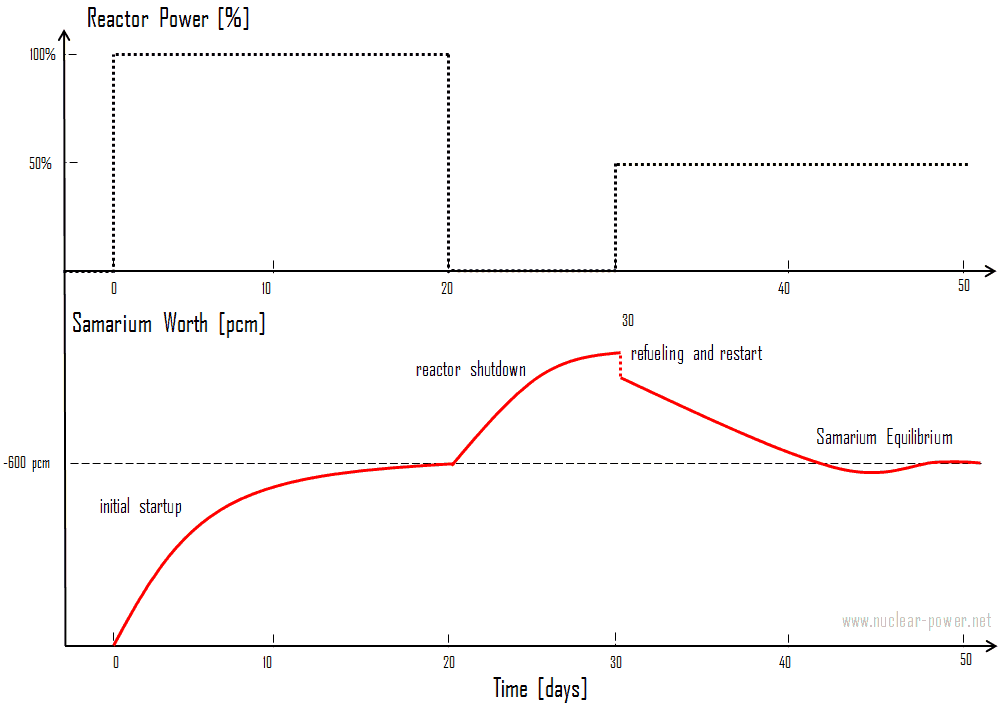 It was written that the samarium equilibrium is independent of the neutron flux level; therefore, stationary samarium worth is also independent. Note that the promethium equilibrium, which determines especially the samarium peak concentration after shutdown, is flux dependent! The reactor shutdown must be considered in estimated critical conditions calculations, and it can influence MTC at the beginning of the next cycle.

Moreover, especially high flux research reactors must not be shut down suddenly. Sudden shutdown of a reactor with a thermal flux of about 1019 neutrons/cm-2.s-1 can cause more than thirty times higher samarium poisoning than PWRs. This can cause permanent poisoning and preclude any reactor startup. These reactors must lower the reactor power gradually to burn off as much samarium 149 as possible before shutdown.