Facebook Instagram Youtube Twitter
Skip to content
The strong interaction or strong force is one of the four fundamental forces and involves the exchange of the vector gauge bosons known as gluons. The strong nuclear force confines quarks into hadron particles and acts to hold neutrons and protons together in nuclei.

In general, the strong interaction is a very complicated interaction because it significantly varies with distance. The strong nuclear force holds most ordinary matter together because it confines quarks into hadron particles such as the proton and neutron. Moreover, the strong force is the force that can hold a nucleus together against the enormous forces of repulsion (electromagnetic force) of the protons is strong indeed. From this point of view, we have to distinguish between: Most of the mass of a common proton or neutron results from the strong force field energy, and the individual quarks provide only about 1% of the mass of a proton. Noteworthy, because most of your mass is due to the protons and neutrons in your body, your mass (and therefore your weight on a bathroom scale) comes primarily from the gluons that bind the constituent quarks together rather than from the quarks themselves. Mass is primarily a measure of the energies of the quark motion and the quark-binding fields.

As was written, the strong interaction is a very complicated interaction because it significantly varies with distance. At distances comparable to the diameter of a proton, the strong force is approximately 100 times as strong as the electromagnetic force. However, at smaller distances, the strong force between quarks becomes weaker, and the quarks begin to behave like independent particles. In particle physics, this effect is known as asymptotic freedom.

As a result, the strong force can leak out of individual nucleons (as the residual strong force) to influence the adjacent particle. On the other hand, the strong force cannot reach outside the nucleus. This is due to color confinement, which implies that the strong force acts only between pairs of quarks. Color-charged particles (such as quarks and gluons) cannot be isolated (below Hagedorn temperature). Therefore in collections of bound quarks (i.e., hadrons), the net color-charge of the quarks essentially cancels out, resulting in a limit of the action of the forces.

What are Gluons – Mass of Quark

Noteworthy, because most of your mass is due to the protons and neutrons in your body, your mass (and therefore your weight on a bathroom scale) comes primarily from the gluons that bind the constituent quarks together rather than from the quarks themselves. Mass is primarily a measure of the energies of the quark motion and the quark-binding fields of any real object. It must be noted that gluons are inherently massless. They possess energy. 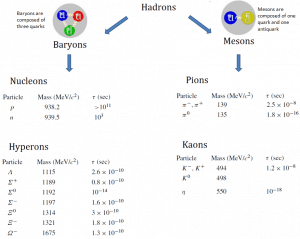 In general, particles that participate in strong interactions are called hadrons: protons and neutrons are hadrons. The hadrons are further sub-divided into baryons and mesons according to the number of quarks they contain. Protons and neutrons each contain three quarks; they belong to the family of particles called the baryons. Other baryons are the lambda, sigma, xi, and omega particles. On the other hand, mesons bosons are composed of two quarks: a quark and an antiquark. Besides charge and spin (1/2 for the baryons), two other quantum numbers are assigned to these particles: baryon number (B) and strangeness (S). Baryons have a baryon number, B, of 1, while their antiparticles, called antibaryons, have a baryon number of −1. A nucleus of deuterium (deuteron), for example, contains one proton and one neutron (each with a baryon number of 1) and has a baryon number of 2. Since baryons make up most of the mass of ordinary atoms, everyday matter is often referred to as baryonic matter.

The residual strong force, also known as the nuclear force, is a very short range (about 1 to 3 fm) force, which acts to hold neutrons and protons together in nuclei. In nuclei, this force acts against the enormous repulsive electromagnetic force of the protons. It acts equally only between pairs of neutrons, pairs of protons, or a neutron and a proton. The term residual is associated with the fact that it is the residuum of the fundamental strong interaction between the quarks that make up the protons and neutrons. The residual strong force acts indirectly through the virtual π and ρ mesons, which transmit the force between nucleons that holds the nucleus together.

Notwithstanding they have an identical origin, the residual strong force is much weaker than the fundamental strong force. It is very much like the electromagnetic forces between neutral atoms (van der Waals forces), which form molecules and are much weaker than the electromagnetic forces that hold electrons associated with the nucleus, forming the atoms.