The concept of three protective barriers refers to a series of strong and leak-tight physical barriers between radioactive products and the environment. The barriers prevent releases of radioactive products in all circumstances. The goal of defence-in-depth, introduced in the preceding section, is to ensure basic safety functions, i.e., controlling reactivity, cooling irradiated fuel and containing radioactive substances. These safety functions are necessary to ensure all barriers remain effective. 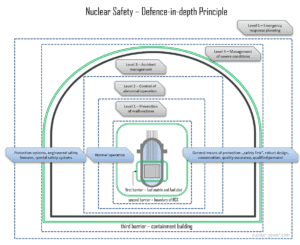 Uranium dioxide is a ceramic refractory uranium compound, in many cases used as a nuclear fuel. The fission products in an operating reactor are contained within U02 pellets that are packed into clad fuel elements which are assembled within the reactor core. Both the fuel matrix and fuel cladding prevent escape of the fission product gases and confine fission fragments during abnormal and most accidents. This barrier is protected by levels 1 – 3 of defence-in-depth. DNB, fuel and cladding temperatures constitute key acceptance criteria. Sometimes, this barrier is mentioned as the first and the second barrier.

The reactor core is located within a pressure vessel that in turn is located inside a containment building. The primary circuit is a closed circuit made of thick steel. The reactor pressure vessel forms part of this circuit. Fission products that have escaped from the fuel have to be confined by this second barrier. Integrity of the primary circuit is also protected by levels 1 – 3 of defence-in-depth. Maximum system pressure and PTS are key controlled criteria.

The containment building is primarily designed to prevent or mitigate the uncontrolled release of radioactive material to the environment in operational states and in accident conditions. Therefore it is considered to be the fourth and final barrier in the defence-in-depth strategy. While the containment plays a crucial role in Design Basis Accidents or in Design Extension conditions, it is “only” designed to condense steam from primary coolant and to contain it inside the building. Integrity of the containment building is also protected by levels 1 – 4 of defence-in-depth.

In normal operation, the barriers are not generally perfectly leaktight: cladding ruptures and leaks in the reactor coolant system and the containment building of limited significance may occur. It is important to mention in this context the particular case of PWR steam generator tubes, which are part of the second and third barriers, since the rupture of a tube may cause the safety valves of the steam generator to open, thus creating a containment bypass.